Pa Adebisi Adegoke, 85, and a former chief relations officer of the Nigerian Railway Corporation, retired in 1990. In this interview, he speaks on how he, a Muslim, has been living with his Christian wife, Iyabo, 74, for the past 52 years and why the railway of his time was effective.

I was born in 1928 in Oyan, Osun State. At a very early age, I was taken to Ghana where I started Quranic School. My uncle had sent for me to come there. The idea then was that I would be trading with him because he was a trader, and at the same time schooling, but it was when I got there that he discovered that that I was too fragile to be involved in trading.

So, I started going to Quranic School first before going to conventional school. This was after I had clocked 13. I went to Ogbomosho Baptist School established by Ogbomosho settlers in Ghana. Then I went to Anshate Kotoko School. I returned home in 1946 after I had completed Standard Six. It was in Saint Paul’s School, Oyan that I completed my primary education and proceeded to Ibadan Boys High School for my secondary education.

It was after that, that I got a job with the Ministry of Education of Western Region then. I was one of the members of the ministry that started the free education programme of the Action Group. I worked in Abeokuta and Ilaro, both now in Ogun State. But because the routine nature of the job had become monotonous and boring, I decided to cross to Lagos to join P and T, that is Ministry of Communication.

I later found the job difficult because I didn’t understand the techniques of sending telegraph, I could receive though. If I had not taken that decision, and management got to know this shortcoming, my appointment would have been been terminated. So, I decided to resign voluntarily. And immediately, I got a job at the Nigerian Railway Corporation, the so- called Nigerian Railway Department in 1955.

I was initially working in the accounts department but I knew I was not good at calculations. Figures terrified me. So when an opportunity came, I quickly crossed to the management side and I found this one so easy. I was in the personnel department. This was in 1958. This was a happy moment for me because I crossed from the junior cadre to the senior cadre, then known as senior service. I left in 1990 as assistant director after 35 years of active service. 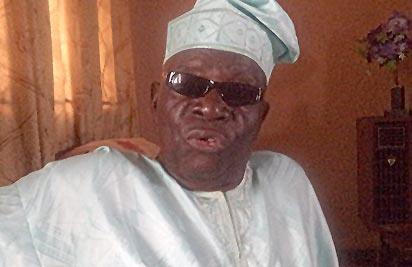 When I came to Lagos in 1954, we were living on the same street. I think she was living with the parents then at 37 Ibadan Street, Ebute Metta and mine was number 135 on the same street. I saw many of her peers, all of them playing after school hours, but I was particular about her. She could not have known. Later, I moved from that house to Mushin because, at Ebute Metta, we were about four living in the same room, but because I wanted to have privacy, I decided to look for my own room. So, on this particular evening, I was returning home when I saw her. I called her but it was obvious she didn’t recognise me. After some explanation, she finally did. And that was where we started our relationship. We got married in 1957.

She was beautiful and had these straight legs. Those were the first things I saw that attracted me to her.

When you are blessed with children, sometimes it makes separation difficult. I didn’t want to part with my children by separating from their mother. Of course, we had our trouble moments like every marriage around, but my focus was I will not leave these children so that if there was any problem, we settle it amicably between us. And when our children started coming of age, they became arbiters in any misunderstanding we may have. But, above all, patience played a big role in it which is lacking in most homes these days and that is why broken homes are common in the society. You hardly see such in those days.

Event that shook the marriage

That was when I was about to retire. I had two sisters. One is dead while the other is alive. My children thought I was bent on sending their mother out of the house. My daughter went to my sisters, and they all used trick to invite me home. They started pleading that I should not send their mother out but, unknowingly to them, I was not serious about that action, and the reason was so simple, when they were about to get married, I would not have wanted another woman to be their mother on the happy moments.

Our children enjoyed free education of the government at that time. That programme was a sort of relief for me. Again, things were not as bad as it is now, economically. But, more importantly, we planned for everything we spent money on or did. I wanted one or two of the children to be doctors because that was one of the few professions in vogue at that time.

He now said if after graduating as business administrator and he could not find job, he would go to Ebutte Metta and be splitting woods for others. And that was what he did. When he finished school, I wanted him to come over to railway but he was not employed even though I was the one that constituted the selection panel for the job; so he just went to Ebutte Metta to split woods in Oko Baba even with an upper credit grade.

That should be my first appointment to the railway. We were four living in a room. And I was the only one withouta job. The house rent was usually shared equally among the four, same with food. It was a thing of joy that I could also contribute to the upkeep of the room. The second was in 1968 when I crossed from the junior to senior cadre because before the elevation, I had thought I was not going further than that position, so I was pleasantly surprised and happy that I was promoted.

Between then and now in the railway

I think the level of corruption compared to now was very low, maybe because there was no much money in circulation at that time. The white men were the administrators of the railway and their dedication to duty was much more than what it is now. At that time, if a police man took money and he was caught, he was going to jail.

Sometimes policemen would come to our office with a letter and they would show the accused and immediately you would be invited to EBJ (Ebutte Metta Junction Railway),which was the headquarters of the police at that time. The way people were prosecuted at that time is much more than what they are doing now. Today, there is no prosecution anymore and that is why corruption is on the increase. Our bosses, the white men, were not corrupt. At that time, there was not much to desire, or I should say, we were contenedt with whatever we had, but now, everybody wants to build storey- buildings, send their children to private schools and abroad.

I tried to convert her initially until I discovered she couldn’t be. As a matter of fact, that would have been our first problem. She was and still a Christian and I was and still a Muslim. I thought I could convert her to Islam, but she was and still the type that goes to church virtually every other day. She attends Cherubim and Seraphim Church.

She goes to church four times a week. And I guess that is why when I was on transfer to Bauchi, before I could return to Lagos, she had converted the children to Christianity. I was in Bauchi for two and a half years and, because I didn’t want to be carrying my family everywhere so that their education would not be distorted, I decided to leave them in Lagos, but, before I returned here, the children had started praying in Christian way and going to church.

I tried to bring them back to Islam but they didn’t bulge. But in all of this, our religions never affected our relationship and marriage. Of course if it does, we would not have lasted these 52 years. It is your attitude that matters. We don’t discriminate on religion here. The most important thing is that you are worshipping God. How you worship Him may differ but the point is it is God.